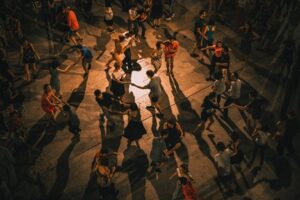 Sometimes, dialogue can’t do much within the film — and that’s when a dance scene comes in. Dance works best when there’s simply no better way to express an emotion than movement, whether it’s joy, romance, or even rivalry.

As dance films and movie musicals have become so popular in recent years, there is no shortage of fun, engaging performances that have entertained generations of movie-watchers. Here are five of our top picks for fun dance scenes in film:

The premise of White Chicks is a little ridiculous and may not have aged well, but this comedy remains an oft-quoted cult classic. Two male, African American FBI agents disguise themselves as a pair of white, twin heiresses to lure a kidnapper out of hiding. And of course, White Chicks made room for a hilarious dance number.

When the socialites battle each other in the club’s dance floor, the undercover agents jump into the scene with their aggressive, hip-hop moves and stunts — and win. It’s so memorable that the cast recreated the scene during their reunion in 2019, 15 years after the movie was released.

West Side Story is a classic, old Hollywood musical with the choreography to match. The story is a retelling of Shakespeare’s Romeo and Juliet, depicting the feud in the original story as a 1950s gang war between the Puerto Rican Sharks and the white Jets. In 1961, the film won a number of awards, including the Academy Award for Best Picture.

The ‘Mambo’ sequence shows the audience the tension between the two groups as they move across the gym. The Sharks in purple and red provide a striking visual contrast to the Jets in blue and yellow. As the two groups wordlessly express their hostility with their dance, the song fades into the ‘Cha-Cha’ and the two star-crossed lovers meet for the first time.

La La Land is a musical film that paints a picture of love and success in Hollywood. While many of the dance numbers in the movie are spectacular and thrilling, none are as joyful or as lively as the opening sequence.

Set in a traffic jam on an L.A. highway, Variety details how 150 dancers had to sing and jump on the roofs of their cars in the 110 degree heat. Later on in the scene, a truck opens to reveal a full band playing drums, cymbals, and other instruments. Watching the colorful, exciting visuals on screen will definitely give you unrealistic expectations for the next time you get stuck in traffic.

Hotel Transylvania movies are among the most popular animated franchises in recent memory, thanks to their creative concept. The story centers around famous monsters living in a hotel run by Count Dracula, and how their dynamics change when a human named Jonathan accidentally stumbles into the hotel.

The films are notable for how they subvert common elements of our world into monster-themed ones. In one scene from the first film, Foxy Bingo points out that skulls — rather than bingo balls — are used to play bingo within the universe. Another example of this is a monster disco where we see regular dance moves, such as break dancing, transformed by the characters in the film. You’ll marvel at how the animation depicts each unique monster’s moves on the dance floor.

Can any article about dancing in movies be complete without this 1987 classic? Dirty Dancing stars Patrick Swayze and Jennifer Grey, catapulting them into fame with a gravity-defying lift at the end of their talent show performance.

The romantic mambo to “(I’ve Had) The Time of My Life” certainly makes for an iconic dance scene. If you want to be like Baby and learn ballroom dancing, sign up for our dance classes today.